What do you do with some grubby old bass pedals from a dead Logan organ? 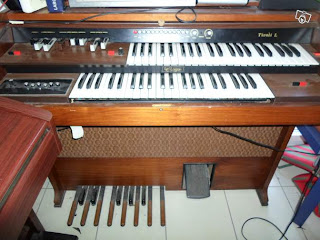 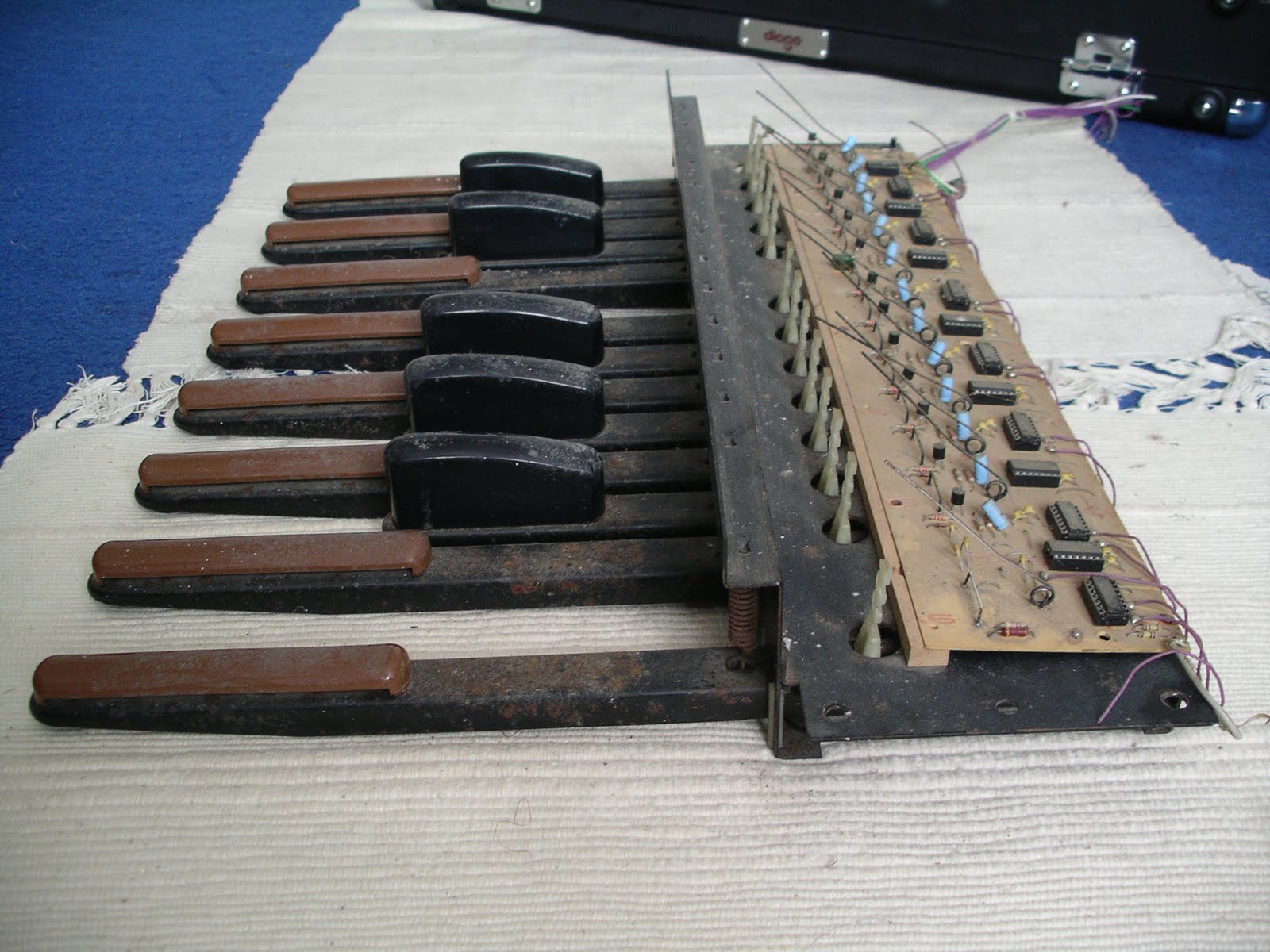 Build one of these, obviously: 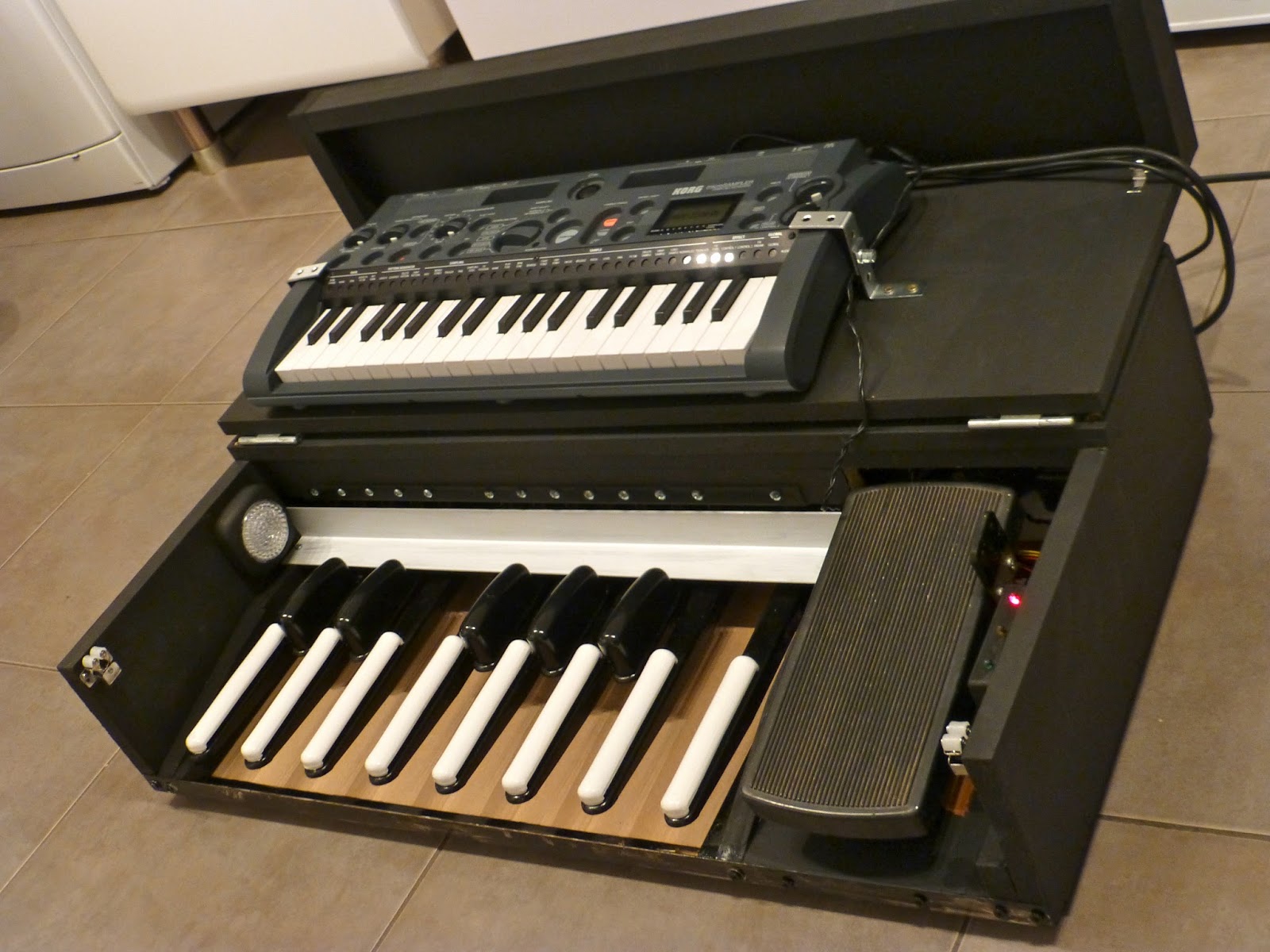 It's a Korg Microsampler triggered through MIDI by the organ pedals, all mounted in a sturdy box that closes into a suitcase-sized unit.

Dave built the pedals into a wood and aluminium box and we got together to thrash out the requirements for the finished article: 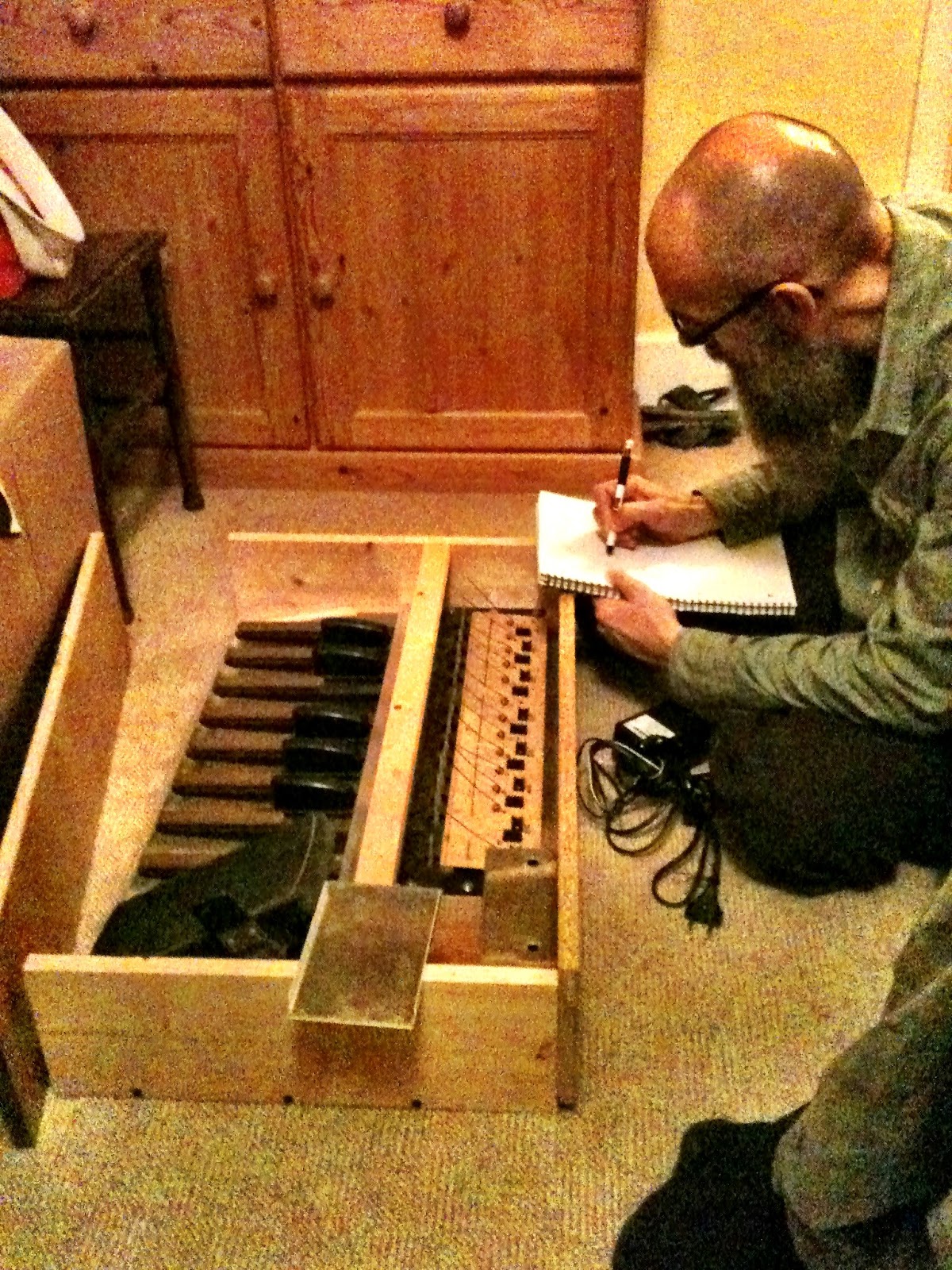 The essential features are:
For the brains I chose to use a 5V/16MHz Arduino Pro Mini. It's got just about enough pins and adequate processing power for this application. The original intention was to mount the Arduino on stripboard and hand-wire it. For this reason, I decided to allocate an input to each pedal switch rather than use a more conventional matrix that would require more components. This turned out to be a mistake. I'm pretty sure I ended up with at least as many components. In any case, the stripboard plan was dropped when I got access to a PCB prototyping machine. I also needed an excuse to learn Eagle, and this is the design I ended up with: 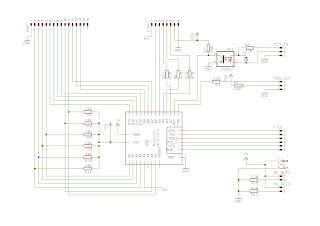 Manually routed, the PCB looks quite neat and only needs to be single-sided: 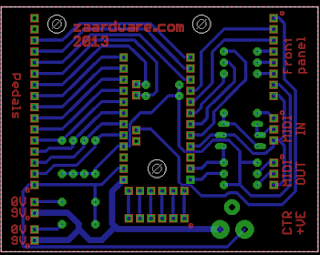 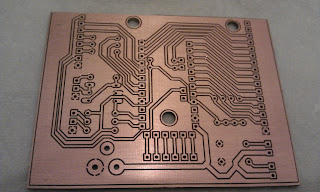 Mounted into the box by screwing a piece of stripboard to the back and fitting stand-offs to it: 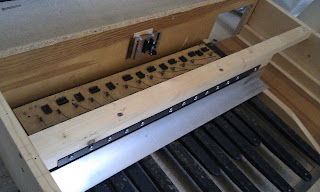 Wired to the pedal switches: 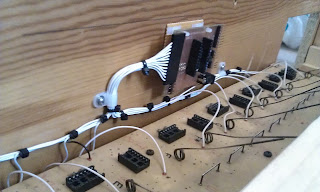 The mains socket is enclosed inside a plastic box for safety, and mounted on the rear panel: 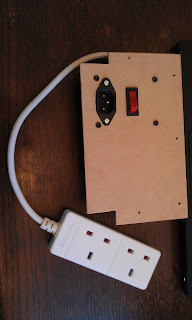 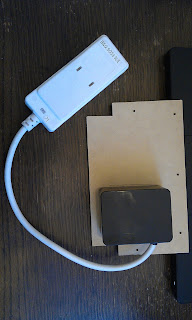 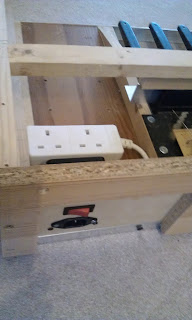 The LEDs to show the selected octave, and the switch and swell pedal connections are going into a small box at the front. No PCB for this, just stripboard hacking: 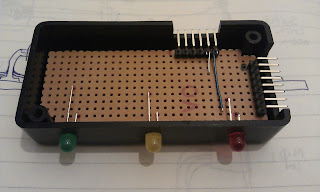 The old optical swell pedal (also recovered from the Logan) had a filament bulb. Now it's a green LED: 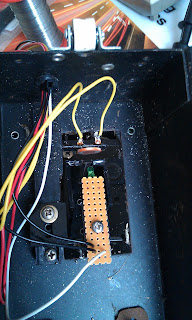 The box is mounted and wired in: 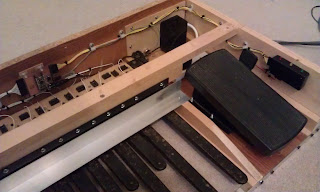 Close-up of the swell pedal and indicator LEDs. The tab on the right-hand side of the pedal is a side-acting switch which toggles through the three banks / octaves. 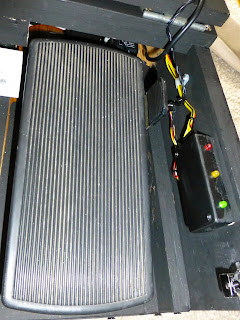 With the MIDI in/out wiring, power to the illuminating LED units and a connection to the back panel for updating the firmware: 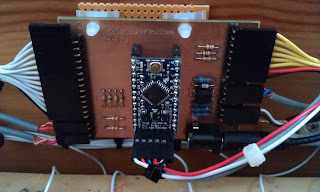 I was able to re-use a lot of the code written for the MIDI Trigger project. It just needed to handle more inputs + a few other tweaks: 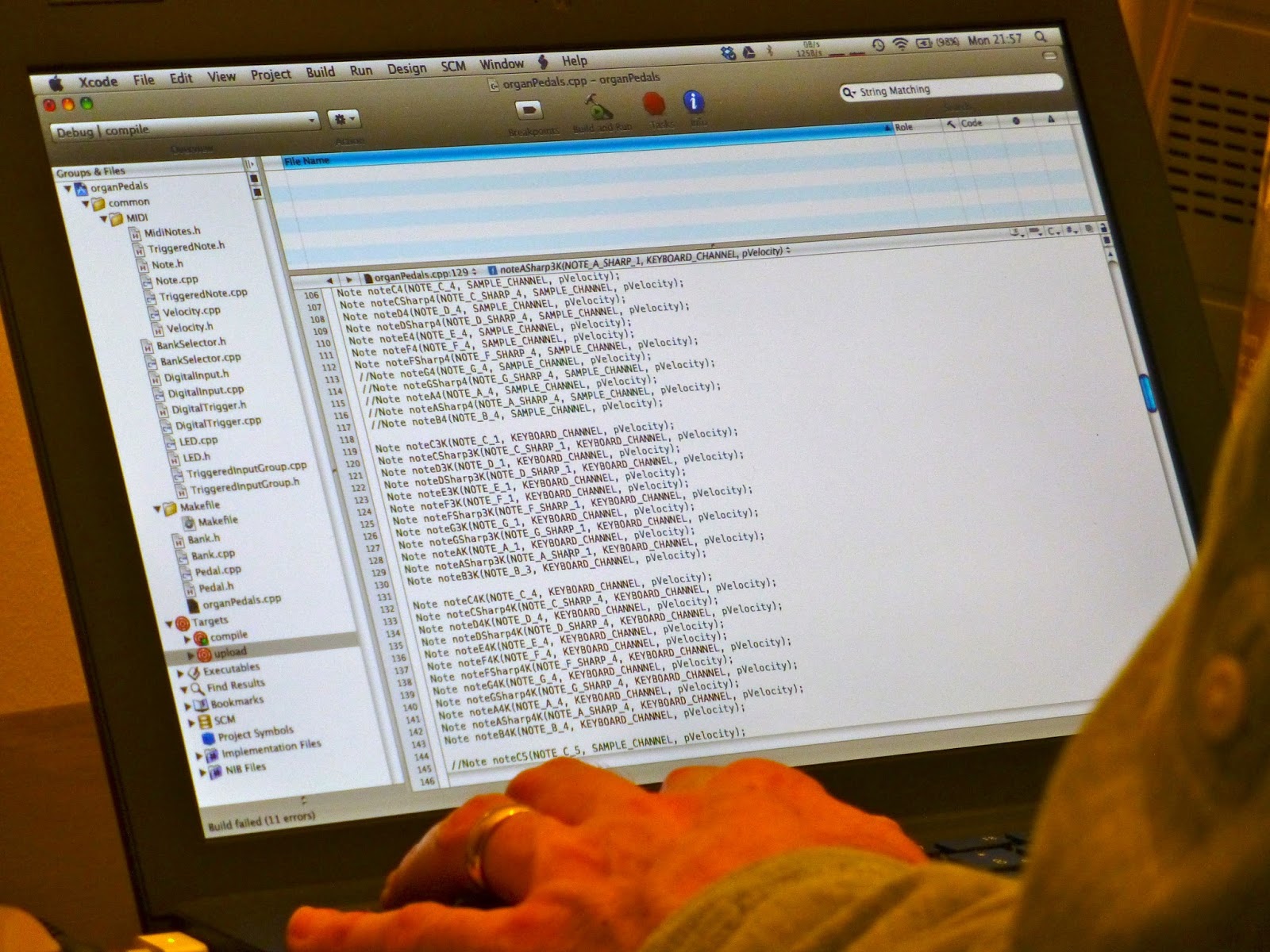 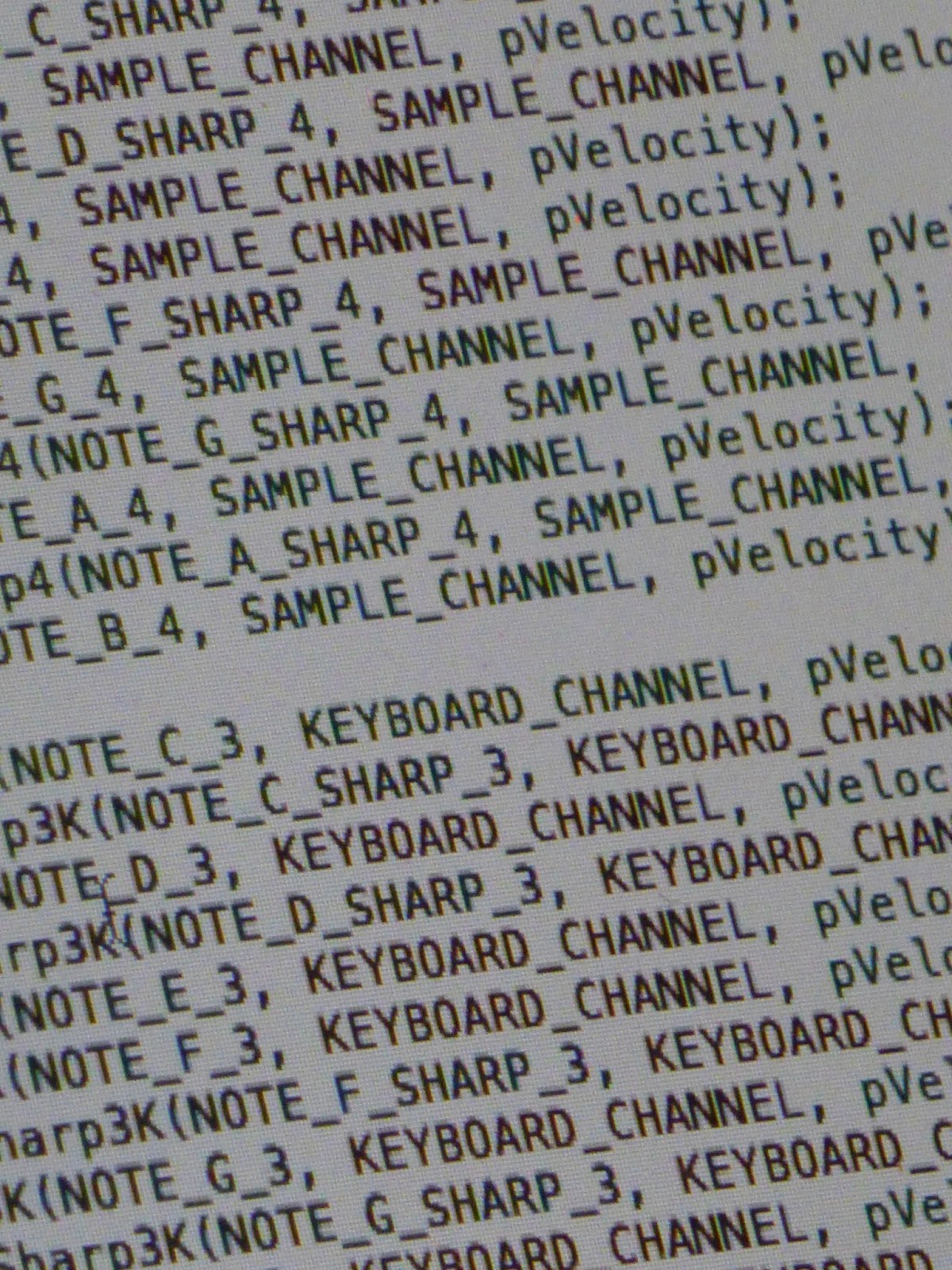 Programming with a USB to serial converter: 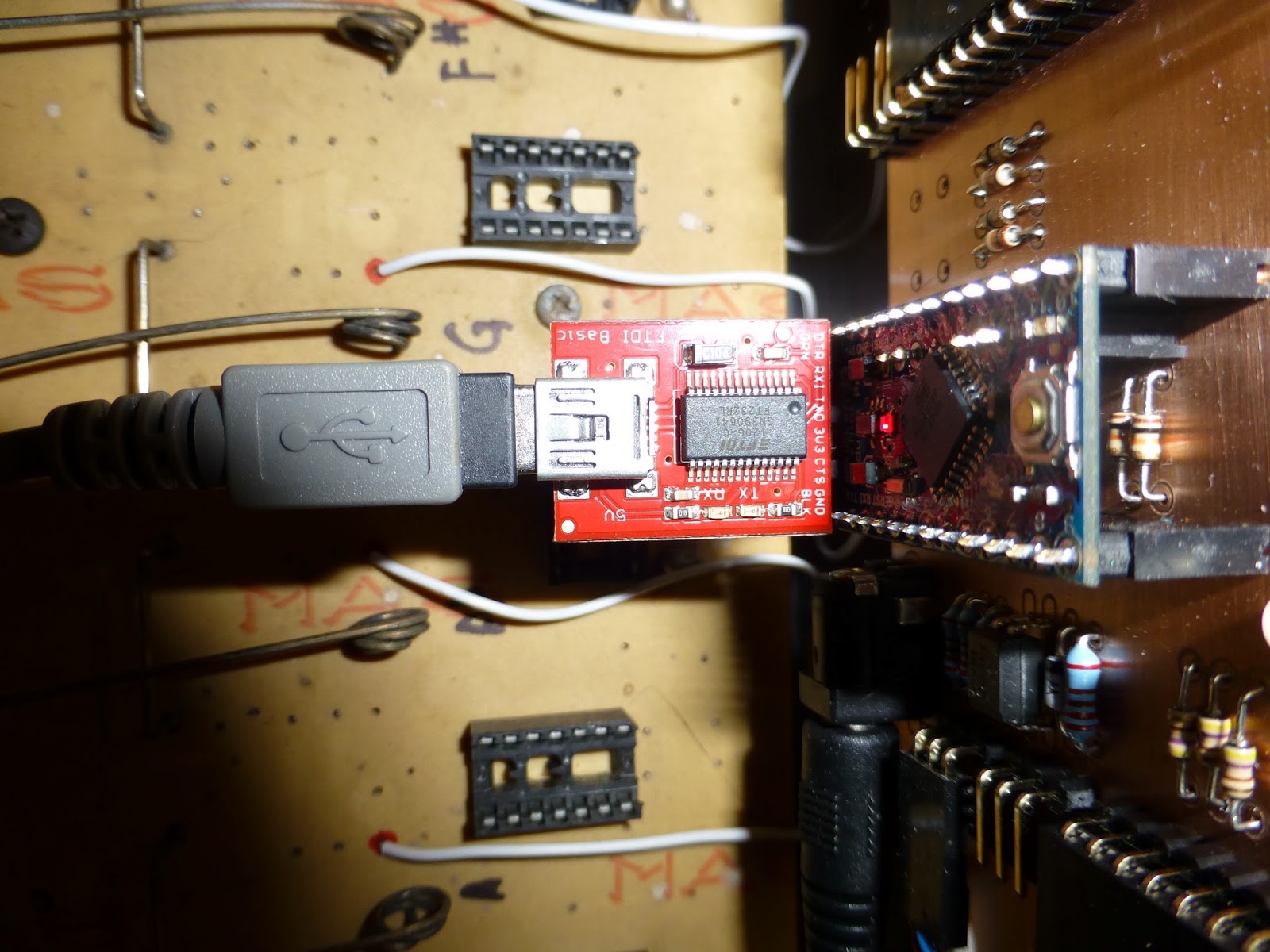 The illumination in action in a dark rehearsal room: 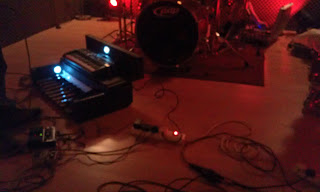 High contrast colour scheme for the key-caps to enhance visibility on dark stages! 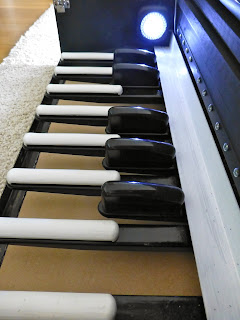 The rear panel - On / Off, Serial, MIDI-In, AC In. Audio Out is via a flying lead connected direct to the Korg. The serial port allows us to squirt new code into the brain without having to unscrew the top of the cabinet. Note the effects of painting the unit in the dark! 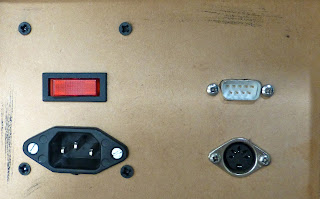 All assembled with the sampler mounted into the lid using a combination of metal brackets and heavy-duty velcro. It's a neat package, but built heavy-duty to withstand life on the road: 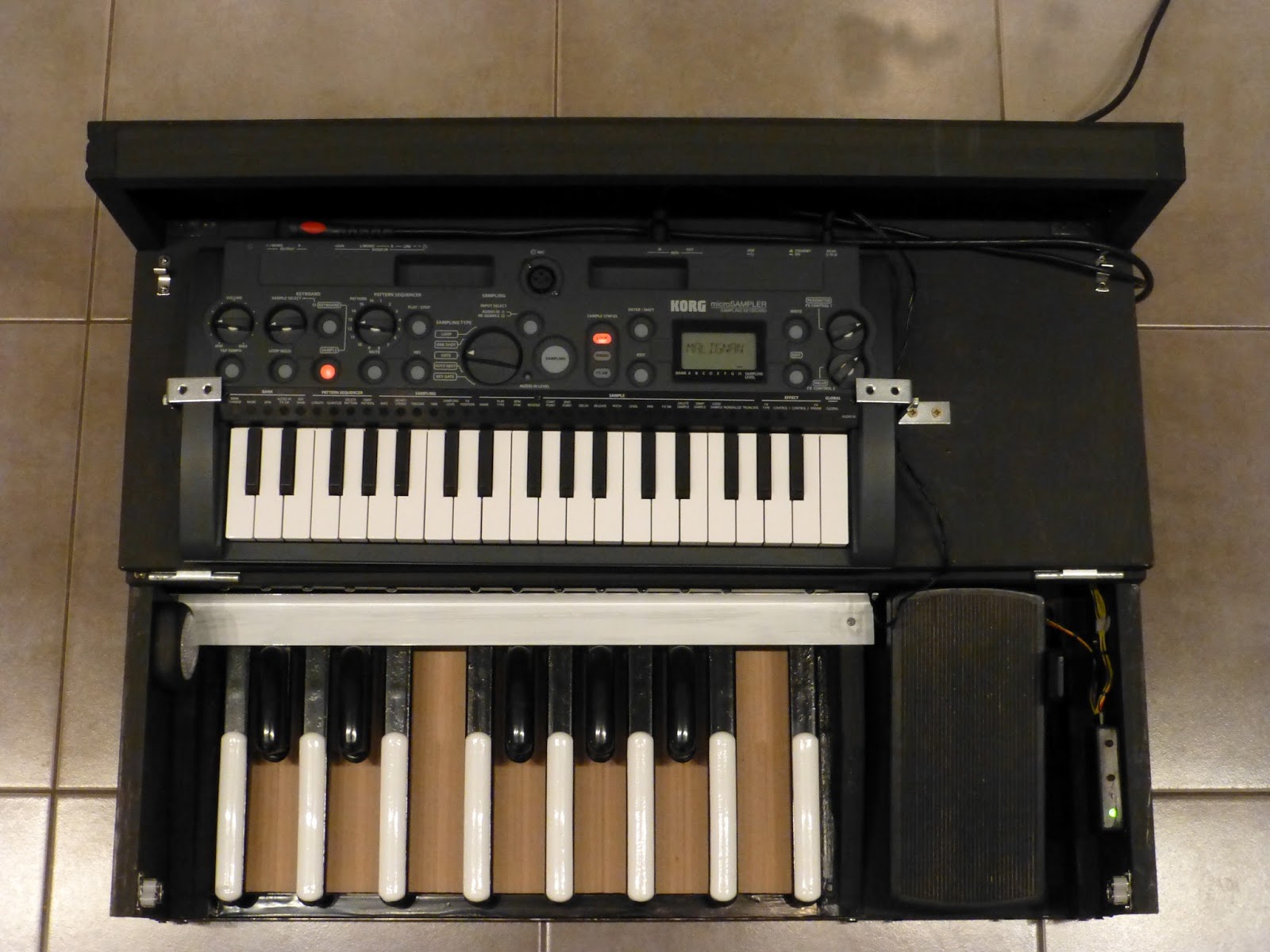 With the lid closed - still awaiting handles, catches and corners for the cabinet. 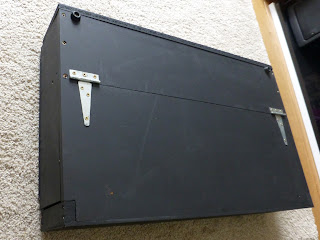 A short video made during testing:

We gigged it for the first time last week, and it seemed to do all the things we wanted it to. It's a huge improvement over the old three-trigger pedal in terms of reliability, visibility and the time it takes to set up on stage. The downsides are its massive footprint on stage, and the bulk of it. The case is made from recycled / reclaimed timber so it weighs enough that I'm afraid to put it on my bathroom scales to find out how much it weighs. It probably would have been lighter if we'd had somebody make it from sheet steel. Consequently it's become the subject of a reverse custody battle among the three members of Zaardvark. Nobody wants to have to carry it home. It almost got left behind the other night. We remembered just in time and found it at the back of the club where a couple of guys were using it as a table.